If you’re as stubborn and self-motivated as I am, then you fully understand where I’m coming from when you hear someone say,”I don’t think you’re going to be able to do that”, and it creates an enticing new challenge for you. Fear of the unknown does not exist. Here’s my story. Written by Juliet Rocco 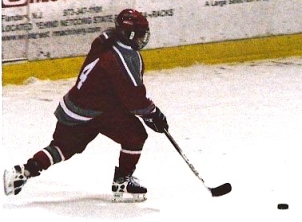 During my freshman year of high school, I wanted to play for the school’s ice hockey team. As the only girl on the team, standing at 4’11” and barely 90lbs, I knew I would have to work extra hard at keeping up with the guys. My parents thought I was crazy, and signing all of those medical and emergency contact forms did not create peace of mind.

After 4 years of hard work, I had earned my varsity letter and the respect of not only my teammates and coaches, but fellow classmates and teachers. I was stepping beyond boundaries that other girls had not in the past.

That didn’t scare me though. It was completely worth it being able to push myself into a new direction and reap the benefits that came with it. There were times, like any athlete, that I doubted my abilities and talent. I knew there were better players, but that did not mean they were as dedicated as I was.

During my senior night game, we all lined up at the blue line right before the National Anthem began to play. One of the referees skated up next to me and said, “I remember when you first started as a freshman, and I’m really proud of you for sticking with it. You’ve done great.”

With all of the emotions building up, that moment made my entire high school career. That recognition meant everything to me. It solidified the confidence I already had in myself and that if I was “crazy” enough to try out for my high school hockey team, I could do so many more great things.

So here I am, nearly five years following my senior night game. I’ve accomplished so much since then, because my mindset hasn’t changed. Remember back to when you were very young, and you thought, “I can do anything”…

Don’t stop thinking that. Ever.